The following year, the Gettysburg College Board of Trustees commissioned an Eisenhower Statue made possible by a generous donation from Mr. and Mrs. Joseph T. Simpson of Harrisburg.  Entitled Eisenhower at Gettysburg, it was sculpted and cast in bronze by Gettysburg College art professor Norman Annis and installed outside of the building used as Eisenhower’s office in retirement.  On October 14, 1970, the Eisenhower Society participated in the dedication of the statue with almost 2,000 people in attendance.  Ever since, the Eisenhower Society has conducted an annual wreath laying ceremony at the statue and hosted a guest speaker to commemorate Eisenhower’s life and work.

Mamie Eisenhower sees the statue of her husband for the first time.

In its first decade, the Society hosted annual convocations with notable speakers who knew Eisenhower.  Guest speakers included General Alfred Gruenther, who served with Eisenhower during World War II and became chief of staff at NATO headquarters, the Honorable William Scranton II, United States Ambassador to the United Nations, D. David Eisenhower, II Esq., Historian and Grandson of the President and the Honorable Richard Thornburg, Governor of Pennsylvania.  For a complete list of guest speakers, (.pdf format) click here. Gettysburg College students, the senior classes of each of the six public high schools in Adams County and local residents were all welcome to attend. 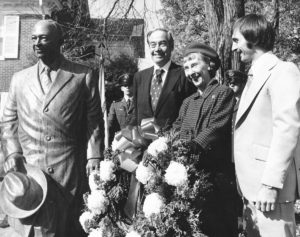 < <   PREVIOUS: Establishment of the Eisenhower Society     NEXT: One President Commemorates Another   > >