Establishment of the Eisenhower Society

General Dwight D. Eisenhower, Supreme Allied Commander in Europe during World War II and 34th President of the United States, died on March 28, 1969.  While the world mourned his death, local Gettysburg residents many of whom had become the Eisenhowers’ friends decided to commemorate his legacy.  As Henry Scharf, owner of the Hotel Gettysburg and President and General Manager of the Gettysburg Times, recollected in an oral history:

On October 14, of 1969, it was the first birthday following his death, I got a group of people who served on the “Welcome Home Committee” after the White House days and a few others.  We observed his birthday, that was the primary thing and then, at the conclusion of the luncheon why we talked about making this annual affair and forming the Dwight D. Eisenhower Society and to implement it. 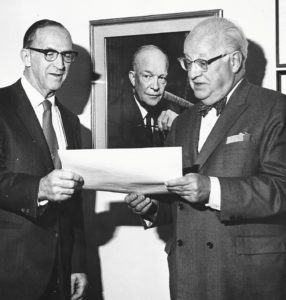 The initial efforts of the Society were to sponsor an annual lecture about Eisenhower and to publish the proceedings in printed form for libraries.  The group also set out to establish an endowment of $50,000 for this program.  During the early years, there was also a discussion about establishing an Eisenhower Chair at Gettysburg College.

NEXT: Annual Wreath Laying and Convocation   > >