To ensure the continued existence of the Society, Charles Wolf and others led efforts to increase the endowment.   Careful investments and receipt of some bequests bolstered the fund.  In 1987, Leroy Smith generously gave the Society the David Wills House located on the Gettysburg square.  It was assessed at a half million dollars.  Attorney David Wills hosted Abraham Lincoln at his home the night before he delivered the Gettysburg Address.  While much of the building was leased out to tenants, Society Trustee Jacqueline White oversaw the Lincoln Room Museum operation to keep it open for public visitation. 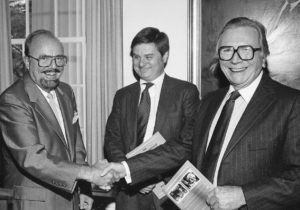 At one point the Wills House was to be transferred to Gettysburg College, but that did not happen.  On December 29, 2000 the Eisenhower Society sold it to the Borough of Gettysburg a half million dollars.

Also in the 1990s the Eisenhower Society began holding its annual convocations at the 5,000 seat Knott Arena of Mount St. Mary’s College in Emmitsburg, Maryland.  Schools from Adams and Franklin Counties in Pennsylvania and Frederick and Carroll Counties in Maryland were invited to participate in the program.  The convocations continued until the mid-1990s.  At that point, school systems began requiring that student field trips be tied directly to school curriculum.  As educational and financial constraints inhibited student travel, the Eisenhower Society stopped hosting the annual convocations. 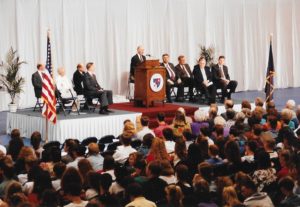 With the death of many of the charter members of the Eisenhower Society, a new generation of leaders stepped forward to continue the Society’s work.  Jacqueline White and Walton Jones were instrumental at this time.  The society continued to host a wreath laying commemoration at the Eisenhower statue each October and by the end of the decade, the Society began a grant program to support educational endeavors to help students and the public learn more about Eisenhower.

< <   PREVIOUS: Preparing for the Eisenhower Centennial in 1990     NEXT: A New Millennium and a New Direction: Education, Grants and Scholarships   > >