One President Commemorates Another

During the 1970s and 1980s, the Society continued to host annual convocations at Gettysburg College with high school and college students and the public invited to the events.  One of the best attended convocations was in October 1983.  That year former president Gerald R. Ford assisted at the wreath laying and spoke at the convocation.  The local radio station, W-GET, broadcast the president’s speech for all to hear.  Ford began, saying:

President Eisenhower, I say, with deep conviction, had a tremendous impact on my life and my career.  By his actions, as well as his words, Ike epitomized everything good about a military leader and a politician.  For me, Ike was a role model.  He set an example for me, and I hope for each of you.  I first met General Eisenhower in early 1952, when he returned from Europe to enter the political arena.  As a relative newcomer in the House of Representatives in Washington D.C., I had shortly before joined with about 12 other members of the Congress in urging General Eisenhower to leave NATO, and to enter the 1952 presidential contest.  I had taken this step as the junior member of this group of Congressmen at some peril, because my political district in Western Michigan was primarily what we would call “Taft Country.”  And I gambled because I felt then, as I have since, that President Eisenhower would be an outstanding leader of our country. 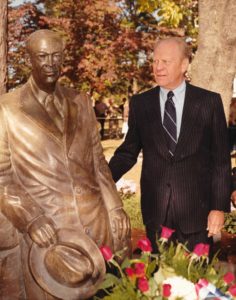 This very, very small group of Republican members of the Congress met with Ike; we reaffirmed our support for him, and we pledged to campaign not only for his nomination, but for his election.  I’ll never forget that first meeting.  He was warm and friendly even to the most junior member of this delegation that met with him.  He talked about world problems as he saw them, and his views on the challenges that our nation faced here at home.

Ford went on to speak about working with Eisenhower while in Congress, as he believed in the same values and ideas that Eisenhower did.  Even in Eisenhower’s retirement, Ford continued to work with the former president, coming to Gettysburg on a number of occasions.
To read a transcript of the entire broadcast of Ford’s speech, (.pdf format) click here.