A New Millennium and a New Direction:
Education, Grants and Scholarships

With the beginning of the millennium, the Society’s grant program expanded.  Each year, based on the value of the endowment, $40,000 -$45,000 in grants was awarded.  The Society established an application and review process ensuring that the grant requests met the Society’s mission to commemorate and educate about Eisenhower.  Final reports for each grant were also required.

The Eisenhower Society presented four scholarships to students at Gettysburg College each year.  Funded by the Robert M. Hoffman Family Memorial Trust, the amount of the scholarships totaled about $14,000 annually.

By the end of the decade, the Society had firmly established itself as a provider of educational grants and looked at ways to provide more educational opportunities for its members.  In 2009, partnering with Gettysburg College and the Eisenhower National Historic Site, the Society supported a conference commemorating the 50th anniversary of Khrushchev’s 1959 visit to President Eisenhower’s farm. 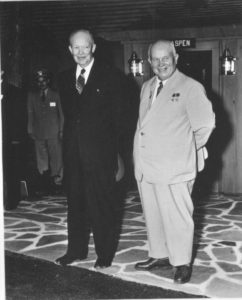 Khrushchev and Eisenhower met at Camp David before traveling to the Eisenhower Farm, September 1959. (U.S.Navy)

Get PDF List Here
< <   PREVIOUS: Beyond the Centennial     NEXT: New Opportunities for Society Members to Learn and Enjoy   > >